The Tavistock Institute of Human Relations: Shaping The Moral, Spiritual, Cultural, And Political. And Economic Decline Of The United States Of America by John Coleman (PDF)
The authoritative expose of the greatest brainwashing organization to ever exist in the course of human history is now revealed in Dr. John Coleman's latest book, The Tavistock Institute of Human Relations: Shaping the Moral, Cultural, Political, and Economic Decline of the United States of America. The Tavistock Institute is located in the City of London and at Sussex University in England. Dr. John Coleman, the author of 15 books, the best known of which is Conspirators Hierarchy, The Committee of 300, was one of the the first writers to bring the world's attention to the existence of Tavistock, hitherto unknown to press and pundits alike, in a monograph published in 1969. Since his initial 1969 revelations concerning the pivotal role that Tavistock plays in shaping political, social, educational, and economic 'opinions', especially in the United States, more than a few writers of global conspiracy have attempted to place laurels upon their shoulders for revelations about Tavistock's key influence as the Mother of all Propaganda Ministries, while ignoring the fact that this pioneering work was first published by John Coleman. Dr. Coleman's new book, however, leaves no doubt as to who is the master and who are the students when it comes to the subject of Tavistock. 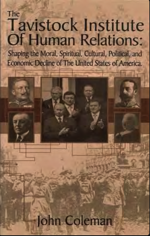 Download / View → The Tavistock Institute of Human Relations: Shaping The Moral, Spiritual, Cultural, And Political. And Economic Decline Of The United States Of America (PDF)