The Smoky God, or, a Voyage to the Inner World by Willis George Emerson (PDF)
Written in the style of a factual account, this extraordinary novel details the experiences of a Norwegian sailor named Olaf Jensen, who sails to the centre of the earth through an entrance located at the North Pole. On his deathbed, Olaf recounts the two years he spent with Earth's internal residents - 12 foot tall beings whose capital city is purportedly the original Garden of Eden, and whose continued existence is facilitated by a 'smokey' sun at the centre of the planet. Although a remarkable and entertaining tale for any reader, this book is a must-have for anyone interested in the 'Hollow-Earth' theory and early speculative fiction around the topic. The subsurface world of Agharta is a recurring motif in paradisiacal mythos from around the world - the Valhalla of Norse mythology, Shangri-la, Tibet's Shambhalla, the Belovodia of Siberian shamanism - and as such this novel constitutes both a thoroughly entertaining and informative read. Willis George Emerson was an American writer, newspaperman, lawyer, and politician. Published in 1908, The Smokey God was his sixth book amongst other such as: The Man who Discovered Himself (1919), The Treasure of Hidden Valley (1915), and Winning Winds (1885). The Smokey God has been republished here with an introductory biography of the author. 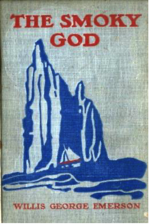 Download / View → The Smoky God, or, a Voyage to the Inner World (PDF)