The Black Pope: A History of the Jesuits by M.F. Cusack (PDF)
Margaret Anna Cusack (1829 –1899), who wrote under her religious name "Mary Francis Cusack" was first an Irish Anglican nun, then a Roman Catholic nun, and then a Religious Sister, and the founder of the Sisters of St. Joseph of Peace. By 1870 more than 200,000 copies of her works which ranged from biographies of saints to pamphlets on social issues had circulated throughout the world. 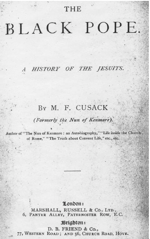 Download / View → The Black Pope: A History of the Jesuits (PDF)