Secret Agenda: The United States Government, Nazi Scientists, and Project Paperclip, 1945 to 1990 by Linda Hunt (PDF)
Here, Hunt, a former CNN investigative reporter, tells a shocking tale: how a branch of the US government deliberately thwarted attempts to bring to justice Nazi scientists who were guilty of war crimes, and who, in at least one case, actually participated in fresh atrocities in the US. While it is common knowledge that the US used Nazi scientists during the cold war, Hunt reveals for the first time that the project to recruit and utilize Nazi scientific talent- -code-named ``Paperclip''--continued until 1973. In addition, while former Nazi scientists (like Werner von Braun) contributed greatly to the development of rockets, jet planes, and other prodigies of technology, Hunt convincingly demonstrates that several such scientists also participated in ``Dachau-like experiments on over seven thousand U.S. soldiers'' on the effects of LSD and other chemicals at Edgewood, Maryland, between 1947 and 1966. Moreover, Hunt explains that the US avidly recruited many Nazi scientists, despite their war crimes--including utilization of slave labor and execution of prisoners--and despite the continuing devotion of many to Nazi ideology. Hunt also relates the sordid details of the intelligence community's attempts to prevent bringing these scientists to justice. And, in at least one case, she shows that the program was inimical to US interests--the man who conceived and ran Paperclip was ultimately convicted of selling American defense secrets to the Soviet Union. An engrossing examination of how a small clique of defense and intelligence officials deliberately subverted stated US policy. 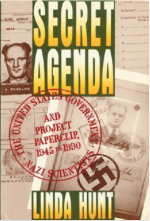