Paradise Found: The Cradle of the Human Race at the North Pole, a Study of the Prehistoric World by William F. Warren (PDF)
"The interior of the Earth, some believe, is home to strange races of technologically advanced beings. Who are they and where are the hidden entrances to their subterranean cities? Many readers of the paranormal and the unexplained are familiar with the theory that the Earth is hollow. The idea is based on the ancient legends of many cultures that say there are races of people - entire civilizations - that thrive in subterranean cities. Very often, these dwellers of the world beneath are more technologically advanced than we on the surface. Some even believe that UFOs are not from other planets, but are manufactured by strange beings in the interior of the Earth. Who are these strange races of beings? How did they come to live inside the Earth? And where are the entrances to their underground cities?" 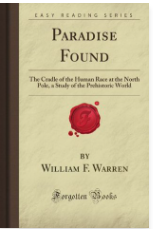 Download / View → Paradise Found: The Cradle of the Human Race at the North Pole, a Study of the Prehistoric World (PDF)