Matrix II: The Abduction and Manipulation of Humans Using Advanced Technology by Valdamar Valerian (PDF)
Even now, this book is perhaps the most influential piece of work that has ever appeared on the planet on the subject of the alien-human interaction issue. It represents the first major work ever published that demonstrated a no-holds-barred approach to revealing what was really going on with the government, underground bases and alien factions. At the time, a lot of people were in denial that what was in the book could possibly be true. Now, years later, it is commonly recognized as the most forthright examination of many core issues, such as abduction by military and alien factions. To date, Matrix II remains the original work that covered these issues in detail - details that no other author would touch. Containing all the information people were denying in the early 1990's, it encompasses an extraordinary range of data that includes precedent-setting research on human abductions by both government and alien forces - material that others authors will not speak of and what publishers will now allow themselves to print. Valerian weaves a wide range of interrelated material into a literary experience that will rock you to the core of your very being - including expansion of your consciousness as a side benefit. Included within the book is a wide-spectrum chronological database, a large section of hypothetical analysis of the alien situation by the Nexus Seven, data and updates on underground bases at Dulce and the Nevada Test Site, a large number of illustrations, maps and charts detailing activity sites, underground installations and tunnel networks, and a commentary by John Lear, Robert Lazar and host of other researchers. Valerian takes us through the gambit of how, why and whom humans are manipulated, information about government connections to the abductions process, post-abduction problems, and the things that the abductee can do. The book is the first to adequately relate research on memory functions relative to the abductions process, virtual reality machines and so-called Reichian programming and mind control by human and alien manipulators. It also discusses the abduction of human children and how to handle the adjustment of the child to the experience, multi-generational abduction scenarios and cases, human multidimensional anatomy and how it can be manipulated by technology. There is more information in this book about the Greys then there is in probably any book existing on the planet, with additional data on the dominant reptilian species. There are implant devices, as well as technical data gleaned from analysis of both government and alien implant devices during 1991. This book contributed toward the beginning of the eventual death-knell for planetary domination systems and its accompanying social control systems (which are expanded on in Matrix III). It spelled the end of classical "ufology". Through this book, we can see how alien interaction has affected wave after wave of civilization on this planet, injecting elements of adverse technology and mind control (again expanded on in Matrix III), and how the suppression of human awareness is being performed and supported. Matrix II is an absolute must to have in your library. It remains the best book on the planet on the subject, and will probably replace all your other books that cover this paradigm. 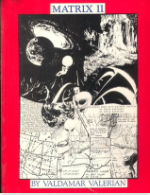