Magick: Liber ABA: Book IV by Aleister Crowley (PDF)
This second-revised edition of Crowley's magnum opus features new, more legible typesetting, text corrections based on a previously unseen corrected proof, and the previously unpublished Liber Testis Testitudinis. The original manuscript of The Book of the Law was re-scanned for this edition, using the latest technology, for the clearest facsimile possible. Aleister Crowley devoted twenty-five years to writing and producing the four parts of this book. It is his magnum opus, in which he systematically expounds the mystical and magical theories and techniques taught in his magical orders, the A∴A∴ and the O.T.O. This profusely illustrated new edition brings together the complete texts of all four parts of Liber ABA (Book 4) in one volume under the overall title Magick. This edition incorporates Crowley`s own additions, corrections, and annotations, and restores dozens of passages omitted from all earlier editions. Magick is the fundamental textbook of modern magick in the New Æon. It also has invaluable teachings for students of Yoga and meditation. Crowley mastered the practices of Yoga during his studies in the East, and writes about them lucidly, without recourse to the imprecise language of mysticism. Beginning with a discussion of the universal origin of world religions in mystical revelation, Magick then explores the theory and practice of mysticism and magick in the light of modern scientific thought. Crowley`s own revelation, The Book of the Law, is then treated as a case study, with an autobiographical study of events leading to its reception. Extensively cross-referenced and annotated, this edition features over 100 diagrams and photographs, as well as a glossary, bibliography, and detailed index. 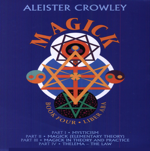