Is the Bible from Heaven? is the Earth a Globe? In Two Parts by Alexander Gleason (PDF)
This book was written in 1890, and revised in 1893. It is authored by the man who devised the “Gleason’s New Standard Map of the World”. The first part details the origins of the Bible, and Part two gives many arguments as to why the earth is not a globe. As this controversy continues to rage, even in modern times, this is the definitive source for the theory. In part One, a detailed system for determining exact time, using Eclipses is given. “On the 27th they came in sight of a mountain 12,400 feet above the level of the sea, which proved to be an active volcano, emitting flame and smoke in great profusion. It was named Mount Erebus, and an extinct volcano to the eastward, 10,900 feet high, was named Mount Terror. Along the coast as far as the eye could reach to the eastward, there was a perpendicular cliff of ice from 150 to 200 feet high, perfectly level at the top, and without any fissures or promontories on its seaward face. Nothing could be seen above it except the summits of a lofty range of mountains extending southward as far as 79º S. To this range the name of Parry was given Captain Ross then sailed along the marvelous wall of ice eastward in 77º 47' S. as far as 78º S. This barrier was estimated to be 1,000 feet thick, and it was followed for 450 miles without a break….” This eBook edition of the 1893 original has been carefully edited for scanning and spelling errors, and is as true to the original as possible. 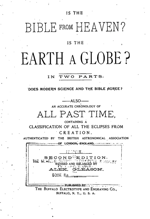 Download / View → Is the Bible from Heaven? is the Earth a Globe? In Two Parts (PDF)