Investiture of the Gods; Feng Shen Yanyi by Xu Zhonglin (PDF)
"Investiture of the Gods" focuses on the last emperor of the Shang Dynasty, King Zhou who is indulged in wine and women since his succession to the throne, profligate and devoid of principles, persecuting the faithful and honest and common people, and finally hated greatly by both man and God. The ancient Chinese goddess N¨¹wa sends the thousand year old vixen spirit to bewitch the king and hasten his downfall which arouses a strong resistance from the people. At the same time, there is a noble and wise sovereign in the west of the State of Qi who has gained unprecedented public approval. Therefore, with God's will and under his master's order, Jiang Ziya goes down the hill and leads his disciples to assist the King Wen and Wu of Zhou in crusading against the King Zhou of Shang. They are respectively supported by the orthodox Chan Taoism Sect and the heterodoxy Jie Taoism Sect. Finally, the King Zhou of Shang dies from self-immolation leads to the demise of the Shang Dynasty, then Jiang Ziya apotheosizes the Gods and assists Ji Chang in building 800 years of the Zhou Dynasty. 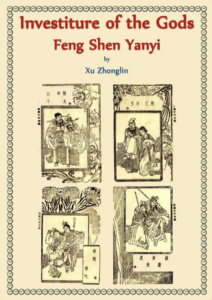