Illuminati 3: Satanic Possession by Henry Makow (PDF)
What passes as spontaneous “social change” is in fact an organized process of satanic possession. This development is not an isolated or recent phenomenon. Western society is based on a rebellion against God and the natural and moral order. The so-called “Enlightenment” refers to Lucifer as the “light giver.” It was an assertion of the Illuminati's determination to reject Reality -- the Creator's Design – and construct an artificial reality more conducive to their interests and perversions. This is what the Cabalist bankers mean by “remaking the world” or “changing the world.” There is no way to sugarcoat this. Satanist (Cabalist) Jews and Freemasons are waging a covert war against God and man and are close to achieving victory. Many Jews and Freemasons have been a subversive force throughout history - the real reason for anti Semitism. Of course, the majority of Jews (and Christians) aren't aware of this process of satanic possession. We have all succumbed to it. Passing as “secularism” and “humanism,” Satanism is the secret religion of the West. 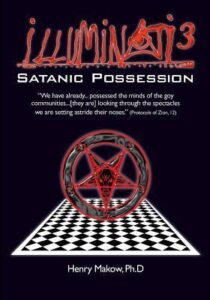