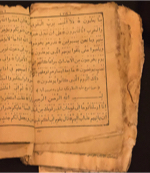 Ancient texts and scriptures from different times and civilizations!

Atra-Hasis [PDF]
Atra-Hasis [Atra-ḫasīs] is an Akkadian epic, recorded in various versions on clay tablets, named for its protagonist, Atrahasis. The Atra-Hasis tablets include both a creation myth and one of three surviving Babylonian flood myths. Wikipedia

The Book of Enoch (also 1 Enoch; Ge'ez: መጽሐፈ ሄኖክ, maṣḥafa hēnok) is an ancient Hebrew apocalyptic religious text, ascribed by tradition to Enoch, the great-grandfather of Noah. Enoch contains unique material on the origins of demons and Nephilim, why some angels fell from heaven, an explanation of why the Genesis flood was morally necessary, and prophetic exposition of the thousand-year reign of the Messiah.

The older sections (mainly in the Book of the Watchers) of the text are estimated to date from about 300–200 BC, and the latest part (Book of Parables) probably to 100 BC – Wikipedia

Book of the Giants [PDF]
The Book of Giants is an apocryphal Jewish book which expands the primeval creation to end of time narrative of the Hebrew Bible and, by its multifaceted elaborations on divine decrees of warning and doom. Wikipedia

Book of Habakkuk [PDF]
The Book of Habakkuk is the eighth book of the 12 minor prophets of the Bible. It is attributed to the prophet Habakkuk, and was probably composed in the late 7th century BC. Of the three chapters in the book, the first two are a dialog between Yahweh and the prophet. Wikipedia

Book of Jubilees [PDF]
The Book of Jubilees, sometimes called Lesser Genesis, is an ancient Jewish religious work of 50 chapters, considered canonical by the Ethiopian Orthodox Church as well as Beta Israel, where it is known as the Book of Division. Wikipedia

Bundahishn [PDF]
Bundahishn is the name traditionally given to an encyclopedic collection of Zoroastrian cosmogony and cosmology written in Book Pahlavi. The original name of the work is not known. Although the Bundahishn draws on the Avesta and develops ideas alluded to in those texts, it is not itself scripture. Wikipedia

Dresden Codex [PDF]
The Dresden Codex is a Mayan book, the oldest surviving book written in the Americas, dating to the 11th or 12th century. The codex was rediscovered in the city of Dresden, Germany, hence the book's present name. It is located in the museum of the Saxon State Library. Wikipedia

Enuma Elish [PDF]
The Enūma Eliš is the Babylonian creation myth. It was recovered by English archaeologist Austen Henry Layard in 1849 in the ruined Library of Ashurbanipal at Nineveh. Wikipedia

Feng Shen Yanyi [PDF]
The Investiture of the Gods or The Creation of the Gods, even The Birth Of The Chinese Gods. also known by its Chinese names Fengshen Yanyi and Fengshen Bang, is a 16th-century Chinese novel and one of the major vernacular Chinese works in the gods-and-demons genre written during the Ming dynasty. Wikipedia

Kebra Nagast [PDF]
The Kebra Nagast, var. Kebra Negast (Ge'ez: ክብረ ነገሥት, kəbrä nägäśt), or The Glory of the Kings, is a 14th-century[1] national epic account written in Ge'ez by Is'haq Neburä -Id of Axum. The text, in its existing form, is at least 700 years old and is considered by many Ethiopian Christians to be a historically reliable work. It is considered to hold the genealogy of the Solomonic dynasty, which followed the Ethiopian Orthodox Church. Wikipedia

Mahabharata [PDF]
The Mahābhārata is one of the two major Sanskrit epics of ancient India, the other being the Rāmāyaṇa. It narrates the struggle between two groups of cousins in the Kurukshetra War and the fates of the Kaurava and the Pāṇḍava princes and their successors. Wikipedia

Mahaviracharita [PDF]
Mahaviracharita is a play by the 8th-century Sanskrit playwright Bhavabhuti based on the early life of Rama, the hero of the Ramayana and venerated as a Hindu deity. It is the first play of Bhavabhuti, thus lacking in character and style compared to his two known later works: Malatimadhava and Uttararamacharita. Wikipedia

Nag Hammadi Library [PDF]
The Nag Hammadi library (also known as the "Chenoboskion Manuscripts" and the "Gnostic Gospels") is a collection of early Christian and Gnostic texts discovered near the Upper Egyptian town of Nag Hammadi in 1945. Wikipedia

Popul Vuh [PDF]
Popol Vuh is a text recounting the mythology and history of the Kʼicheʼ people, one of the Maya peoples, who inhabit the Guatemalan Highlands, Mexican Chiapas, Campeche and Quintana Roo states, and areas of Belize. Wikipedia

Prose Edda [PDF]
The Prose Edda, also known as the Younger Edda, Snorri's Edda or, historically, simply as Edda, is an Old Norse textbook written in Iceland during the early 13th century. Wikipedia

Puranas [PDF]
The word Purana literally means "ancient, old", and it is a vast genre of Indian literature about a wide range of topics, particularly legends and other traditional lore. The Puranas are known for the intricate layers of symbolism depicted within their stories. Wikipedia

Ramayana [PDF]
Rāmāyana is one of the two major Sanskrit epics of ancient India, the other being the Mahābhārata. Along with the Mahābhārata, it forms the Hindu Itihasa. The epic, traditionally ascribed to the Maharishi Valmiki, narrates the life of Rama, a legendary prince of Ayodhya city in the kingdom of Kosala. Wikipedia

Sefer Yetzirah [PDF]
Sefer Yetzirah is the title of the earliest extant book on Jewish mysticism, although some early commentators treated it as a treatise on mathematical and linguistic theory as opposed to Kabbalah. Yetzirah is more literally translated as "Formation"; the word Briah is used for "Creation" Wikipedia

Silappadikaram [PDF]
Silappatikāram, also referred to as Silappathikaram or Silappatikaram, is the earliest Jain Tamil epic. It is a poem of 5,730 lines in almost entirely akaval meter. The epic is a tragic love story of an ordinary couple, Kannaki and her husband Kovalan. Wikipedia

The Zohar [PDF]
The Zohar is a foundational work in the literature of Jewish mystical thought known as Kabbalah. It is a group of books including commentary on the mystical aspects of the Torah and scriptural interpretations as well as material on mysticism, mythical cosmogony, and mystical psychology. Wikipedia

Vedas [PDF]
The Vedas are a large body of religious texts originating in ancient India. Composed in Vedic Sanskrit, the texts constitute the oldest layer of Sanskrit literature and the oldest scriptures of Hinduism. There are four Vedas: the Rigveda, the Yajurveda, the Samaveda and the Atharvaveda. Wikipedia

Zend Avesta [PDF]
The Avesta is the primary collection of religious texts of Zoroastrianism, composed in Avestan language. The Avesta texts fall into several different categories, arranged either by dialect, or by usage. Wikipedia